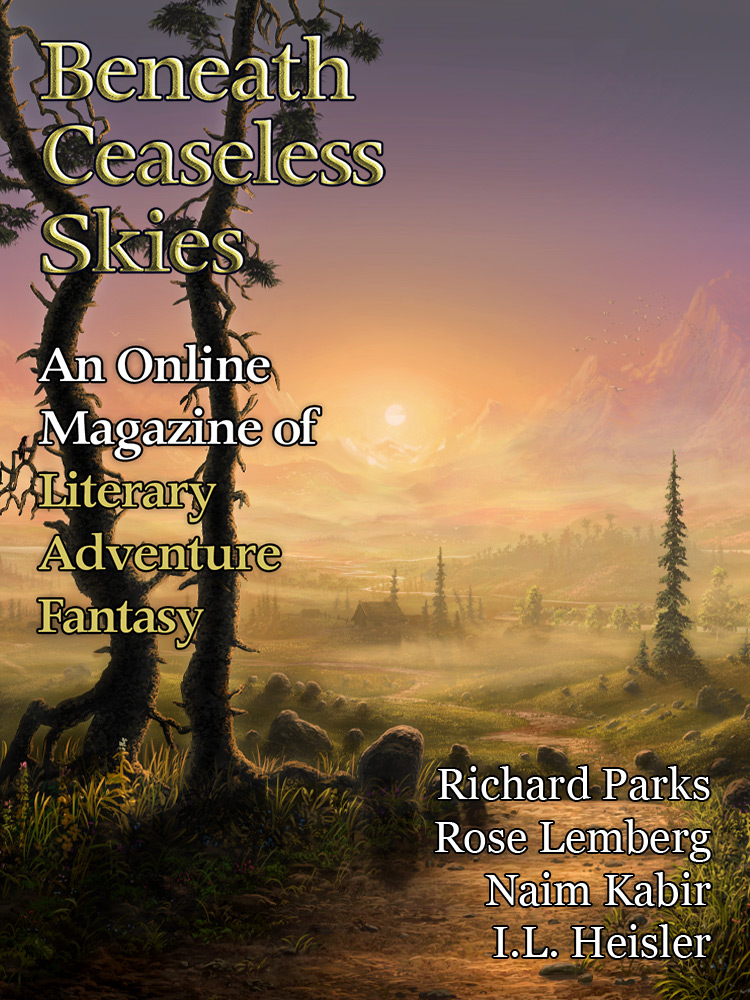 BCS #183, our Seventh Anniversary Double-Issue, is out today!

It includes “The Bride Doll,” a Lord Yamada tale by Richard Parks (“The Sorrow of Rain” in BCS #157, “Cherry Blossoms on the River of Souls” in BCS #131, and ten other stories), and “Geometries of Belonging” by Rose Lemberg, set in the same world as her BCS stories “Grandmother-nai-Leylit’s Cloth of Winds” in BCS #175 and “Held Close in Syllables of Light” in BCS #80.

Plus two more stories: “The Four Schools” by Naim Kabir (“On the Origin of Song” in BCS #131, our Fifth Anniversary Double-Issue) and “The Sons of Vincente” by I.L. Heisler.

The Lemberg and Heisler stories won’t be released on the website until next week, but they are available now in the ebook of the full issue, on Kindle and at WeightlessBooks.com.

The BCS Audio Fiction Podcast episode will be BCS 159 The Sons of Vincente by I.L. Heisler, released next week.

The ‘From the Archives’ story is “A Place to Stand” by Grace Seybold, in BCS #89 and podcast BCS 079, a tale of shifting time-frames not unlike “The Four Schools.” All behind new cover art for our seventh anniversary: “Sundown” by Feliks Grzesiczek.

Our Seventh Anniversary Ebook Sale continues: buy a BCS ebook subscription or the new Best of BCS Year Six from WeightlessBooks.com and get a coupon for 30% off all BCS titles. (Ebook subscribers always get issues before they go live on the website.)

There’s also a giveaway for a copy of BCS author Mathrew Kressel’s new novel King of Shards. It shares the desert world of his BCS stories, “Pheth’s Aviary” in BCS #133  and “The Suffering Gallery” in BCS #57 and podcast BCS 050. The giveaway is in this post. It ends ends Wed. Oct. 7, so enter soon!

In seven (!) years of BCS, we’ve published over 375 stories and 175 audio fiction podcasts. And there’s more to come! Thanks so much for reading!